What Does It Take?

Note: I’m not a flight instructor (CFI) and this information is for educational purposes only. Consult with your CFI for specifics about the particular airplane you are flying.

If you ever wondered how to get a multi engine rating and fly bigger, faster, longer-distance aircraft with more carrying capacity, here’s what you need to know.

Like any flying endeavor, these three factors are involved:

However, those are basics in any be-a-pilot scenario (“do you live to fly or fly to live?”)

Let’s take a look into your hypothetical future.

On the same day, same runway, same approach, which of these is you?

How to Earn a Multi-Engine Rating

For this article, when referencing multi engine planes, I’ll go with two engines and just call it a light twin, because that’s most likely what you’ll train in. If you’re flying around with three or more engines it’s a bit fancier than what you’ll train in and you may need a type rating. Let’s stick with twins.

NOTE: I am not a Certified Flight Instructor (CFI). I do have a Multi-Engine Land rating. This is for informational and anecdotal purposes and is not to be taken as instruction. Consult a qualified CFI

So, let’s go over the main multi engine rating requirements you need to know:

What Will Seem Different to You?

Handling Characteristics – Let’s start on the ground with a light twin. According to the FAA’s Airplane Flying Handbook, the term “light-twin,” although not formally defined in the regulations, describes a small multiengine airplane with a maximum certificated takeoff weight of 6,000 pounds or less.

Physically moving a twin around before and after flight: It’s a handful to yank around the hangar and ramp compared to a Cessna 172 or Piper Warrior. You may want to consider a hand-driven tug to help you. When I flew the Seminole there was no tug around. You can use up a lot of energy lugging the plane around. It’s worse when the ramp has ice patches.

Taxi Maneuvering: During taxi, you can use differential power to help swing the nose of the plane around for a tight turn.

Takeoff Acceleration: On takeoff, acceleration is faster and the rotation speed will be a little higher than you’re used to.

Noise – Inside the cockpit, it’s going to be noisier. Fortunately, with noise-canceling headsets, that’s not much of an issue. One noise you will notice comes from unsynchronized propellor blades. Unless the plane has an auto-sync system, you’ll need to make the RPM adjustments yourself to keep the blades in sync. The rhythmic beat of out-of-sync props can be distracting (as well as annoying to people on the ground.)  Like a greased landing, props in sync are the sign of a pro! 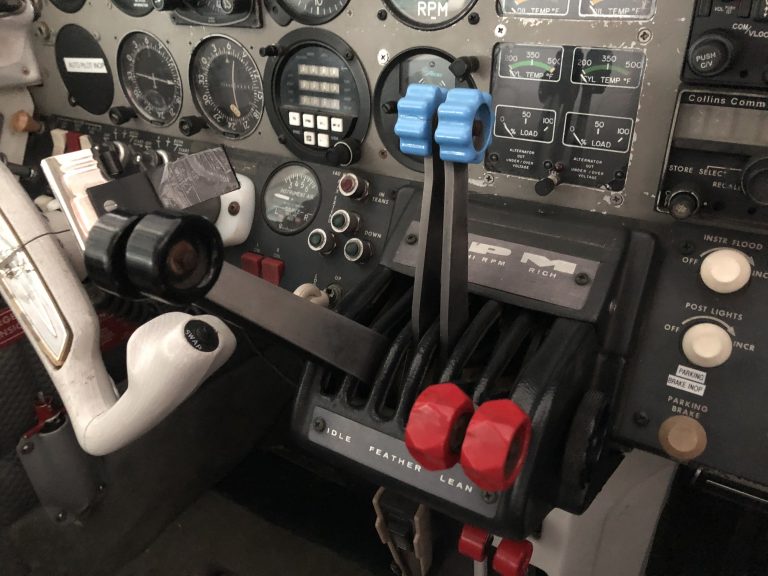 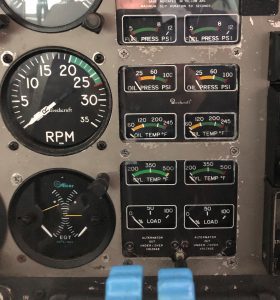 Cabin Heat – In single-engine airplanes, heat is most often supplied by engine heat that fed through flexible hose to the cabin. Multi-engine airplanes usually have a separate combustion heater to provide heat. So there’s another system to tend to. They have their own fuel supply and are controlled by a thermostat. They also have an hour meter so they can be maintained at regular intervals.

Yaw Damper – For smoother rides, some twins have a gyroscope or accelerometer that detects yaw. When detected, a damper servo moves the rudder to reduce the yawing effect caused by turbulence.

Critical Engine – the engine whose failure most affects performance or handling when it fails (while the other engine is producing takeoff power.) More detail is provided in the section on complexity and pilot workload further down the page.

Vyse – Best Single Engine Rate of Climb Airspeed (indicated by a blue radial line on the airspeed indicator) – airspeed that provides the greatest gain in altitude per unit of time, with the airplane configured as follows: Inoperative engine propeller feathered; Max power on the good engine; Landing gear up; Wing flaps in the position for best lift/drag ratio; Cowl flaps as required for cooling;  Airplane flown at zero sideslip. (NOTE: for light twins, there is no guarantee or certification requirement that flying in this”perfect” configuration will allow the plane to maintain level flight or climb (14 CFR Part 23 single-engine climb performance requirements for reciprocating-engine twins )

Vsse—safe, intentional OEI speed—originally known as safe single-engine speed, now formally defined in Title 14 of the Code of Federal Regulations (14 CFR) part 23, Airworthiness Standards, and required to be established and published in the AFM/POH. It is the minimum speed to intentionally render the critical engine inoperative.

Vmc—minimum control speed with the critical engine inoperative—marked with a red radial line on most airspeed indicators.

Accelerate-stop distance – runway length required to accelerate to a speed specified by the manufacturer, experience an engine failure, and bring the airplane to a complete stop.

Accelerate-go distance – Assuming an engine failure at Vr or Vlof, as specified by the manufacturer, it’s the horizontal distance required to continue takeoff and climb to 50 feet.

The Beauty of Earning a Multi-Engine Rating 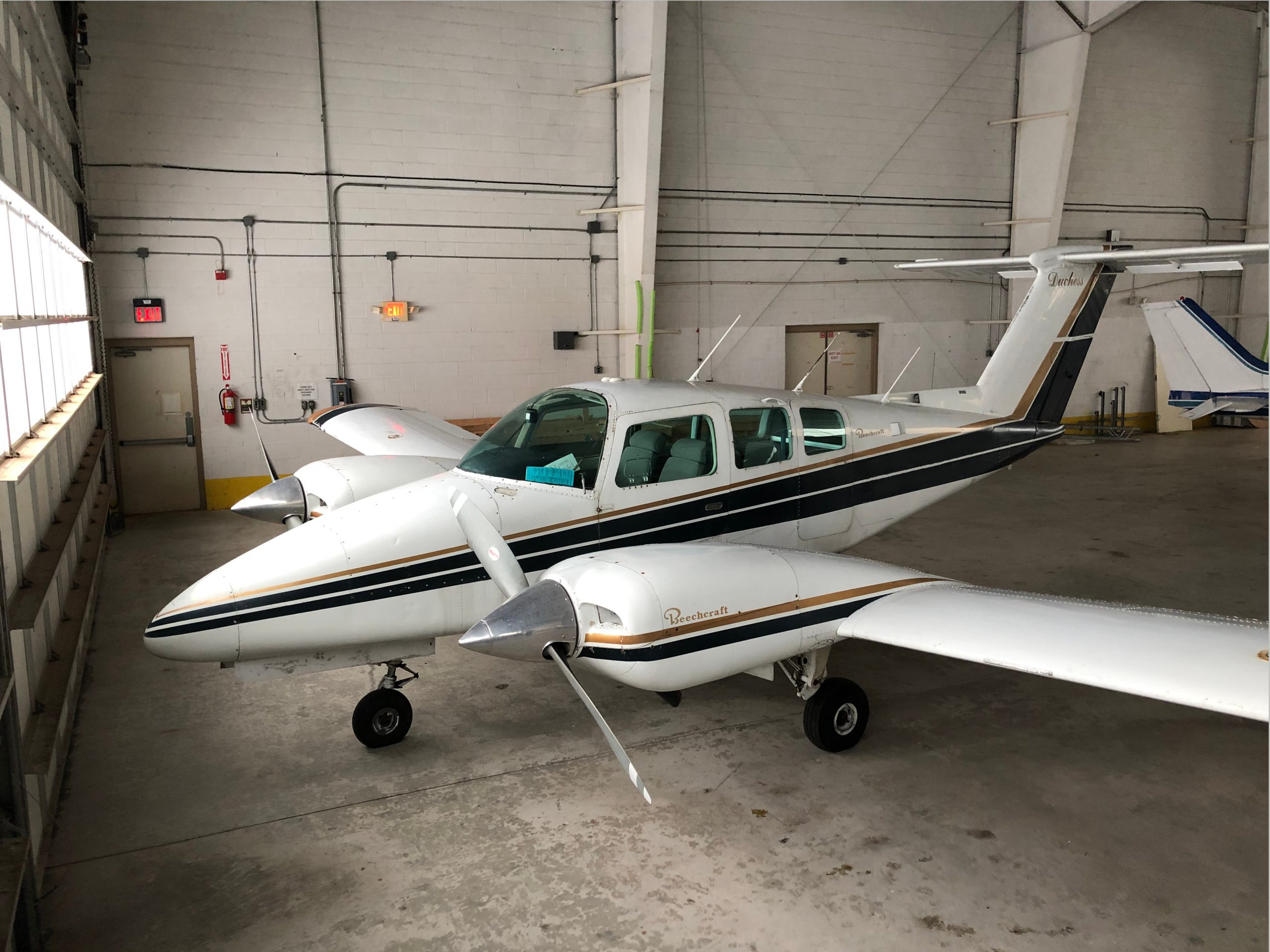 There is no doubt that flying a light twin is a step up. The thrill and pride of mastering a larger, more powerful, faster airplane is hard to beat.

The sound of two powerful engines as you advance the throttles on takeoff is inspiring. More payload, longer distances, and a step up in style and roominess are givens.

In order to enjoy these perks, you want to be the safest multiengine pilot possible. With that comes a new level of discipline and understanding of flight physics.  You’ll learn all of this during your multi-engine upgrade training.  It’s one of the best flight training experiences you’ll have!

A fairly well-debated topic regarding general aviation accidents centers on multi-engine safety. Are two engines better than one? Does a more complex airplane increase workload and require more attention to proficiency? What’s to consider about flying light twins safely?

The Comfort of Having More than One Engine

Flying with more than one engine is reassuring. As a multi-engine pilot, you’ll receive training in what to do if one engine should misbehave or quit. Knowing that another engine can buy you time is comforting.

Depending on factors such as how your airplane is loaded, terrain, and density altitude after an engine failure, your plane should be able to take you the distance necessary to make a precautionary landing. It is possible, however, that the plane won’t be able to climb on one engine or maintain level flight. You’ll learn all about this in your multi-engine upgrade training.

Complexity and workload during single-engine operation (engine failure) are manageable to a proficiently-trained and current pilot. In your training, you’ll learn some new and interesting things that single-engine pilots don’t deal with.

For example, on a twin, a “dead” engine is the same distance from the aircraft centerline as the running engine. However, it’s producing less (or no) thrust (even an element of drag.) The airplane will yaw in the direction of the dead engine. That has to be corrected as part of engine failure procedures.

To make this more complicated, twins that have propellors turning in the same direction have what’s called a “critical engine.”

The engine is “critical” because, at low airspeeds and high angle of attack (such as in a climb during takeoff), the propellor of each engine produces more thrust on one side of the engine than the other. Because the distance from the center of the plane to the descending blade is less on one side of the plane than the other side, losing the critical engine results in more yaw than losing the non-critical engine does. 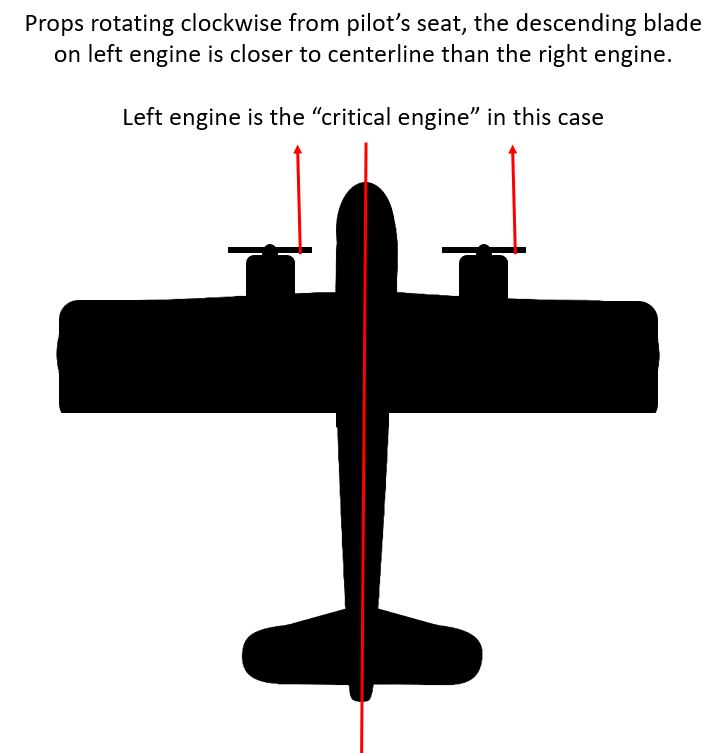 As part of the procedure for stabilizing the aircraft during engine failure, you use the rudder to offset the yaw and approximately regain your heading. It takes more effort to counteract the yaw when the critical engine fails.

With the yaw, you also have a banking problem. If the turn toward the dead engine is not corrected immediately, the airflow over the inside wing is less than the outside wing. In this condition, the dead engine wing could reach a stall airspeed.

Therefore, you’ll learn how to correct the yaw with opposite rudder and bank slightly toward the running engine. That will stabilize the airplane and allow you to next confirm which engine is the dead one and feather the prop.

With the airplane’s nose now on track and a slight bank toward the running engine (generally 5 degrees or what your instructor and the Pilots Operating Handbook (POH) recommend), you’ll take note of which foot is pushing on the rudder pedal. The other foot is called your “dead foot.”

So if your right foot is the dead foot, then it should be the right engine that’s dead. However, it’s very important that you CONFIRM this before doing anything. The way to confirm it is to reduce the throttle of the suspected dead engine and confirm with engine instruments that the good engine did not change speed. Once confirmed you begin the engine feathering procedure from the POH.

It’s pretty awesome when you do this with your instructor! You’ll practice it a lot during your training and be tested on your multi-engine rating check-ride.

I had more fun upgrading to multi-engine than any other training. It felt more like I was building upon what I already knew rather than entering a whole new world.

The upgrade is worth it. Paste this into your favorite search engine: “multi engine rating training near me”

Here are two excellent sources of information (my affiliate links) that are designed with the multi-engine upgrade pilot in mind. These will help you a TON in preparing for your flight training!

I’d like to thank Keith and the staff at AirDirect (KASH) for allowing me access to their Duchess for some photos.

If you’re in the Northeast, drop in to see them and get your multi-engine training!

(disclaimer – I’m not sponsored or employed by AirDirect, just grateful for their friendly assistance!)